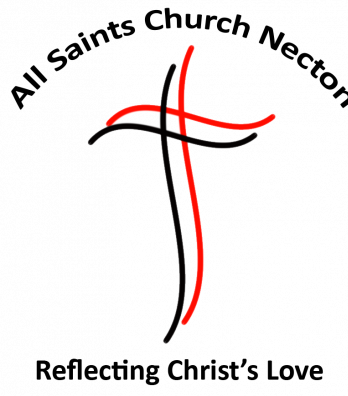 The Tower and South Porch 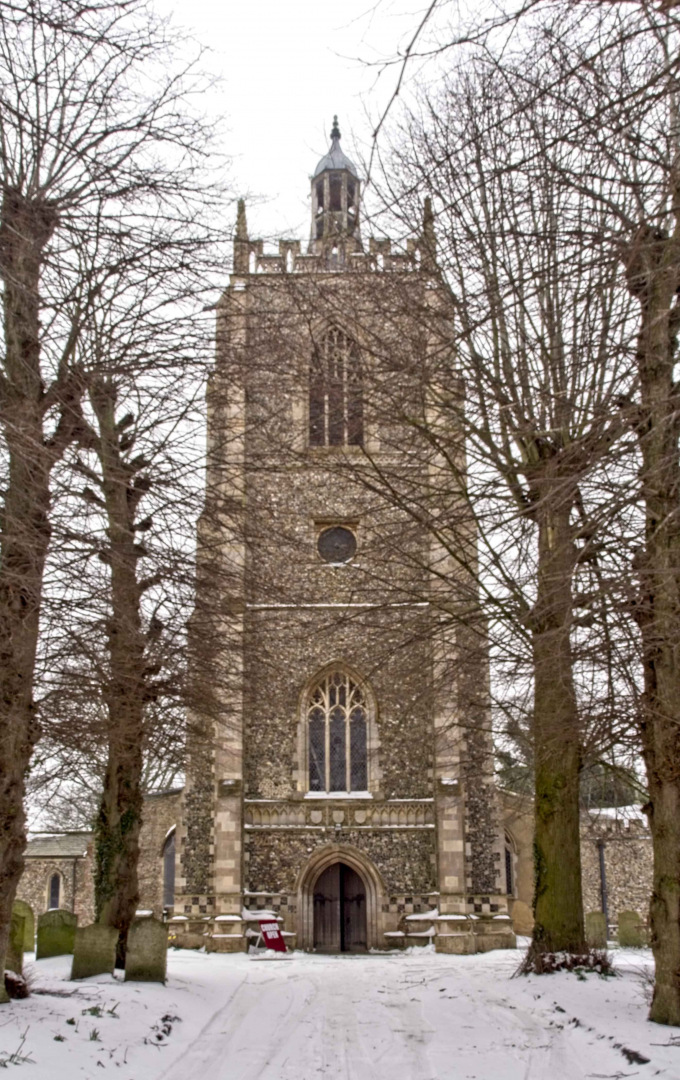 The Tower was designed to take the massive peal of 6 bells which had caused the previous tower to crack.  The lead covered cupola, the pinnacles and the pretty parapet were all innovations of this rebuilding.  The angle buttresses go up in steps, diminishing in size towards the top.  The buttresses belonging to the former tower had black knapped flints in square panels, whereas the replacement buttresses used more cut stone, in this way we can detect the surviving part of the tower on the south side.

The Tower was largely rebuilt in 1864-65 (at a cost of about £1,200) when Colonel Mason paid half the cost, he was enlarging Necton Hall about the same time (unfortunately Necton Hall was demolished in 1989).

In 2015 the Tower and Cupola were extensively restored.

The Porch leads to the tower entrance and is now the main entrance into the church.  At the beginning of the 19th century there were north and south entrances, both remodelled in 1852.  In the porch can be seen part of a 14th century font and also a copy of one of the brasses - Sir Thomas Peyton of Isleham, Cambridge, dated 1434 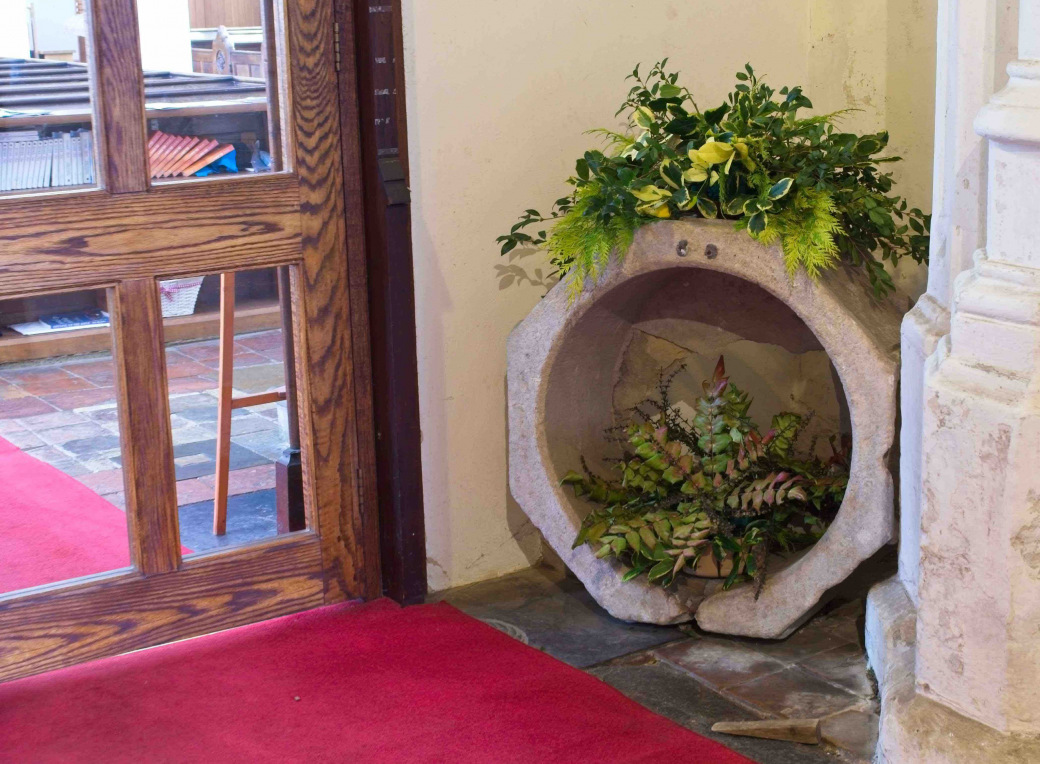 The Clock Face fills a square opening on the west side of the tower and this too was reused from the old tower.  A decorative chequered frieze can be seen around the base course. The west doorway is used as the main entrance and so the tower serves as a porch.

The South Porch was remodelled early in the 19th century to take two Mason memorials.  On the outside look for the gargoyles and the chequer work base course to match the tower.  The inside is now used for the children's Sunday School but is still called the Mason Room.  In it there is a fine pair of monuments based on a design by Augustus Pugin.  They make lavish use of crocketted pinnacles and embellishment surrounding a simple marble plaque.  The Mason arms can be found at the base.  The family lived in Necton from the time of Queen Elizabeth 1 until 1930. 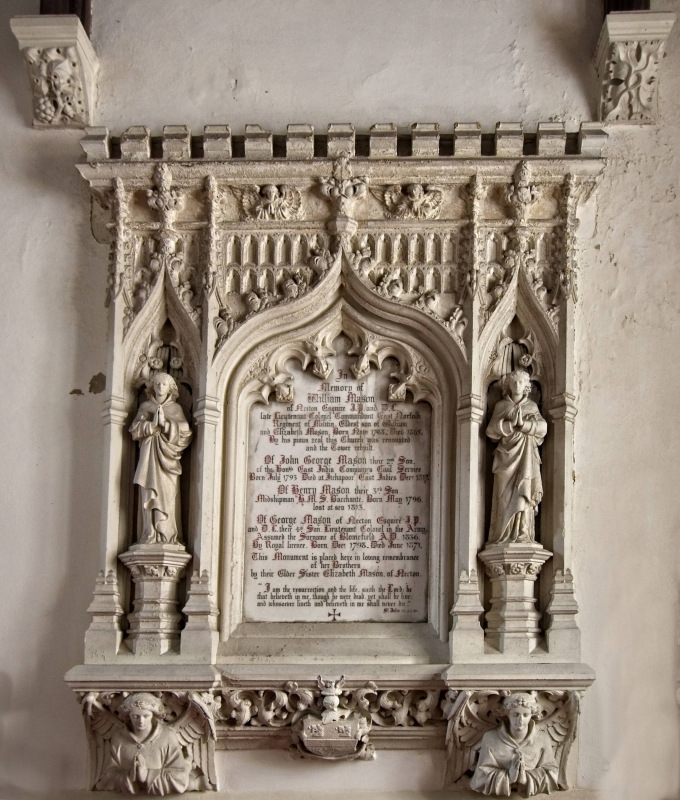 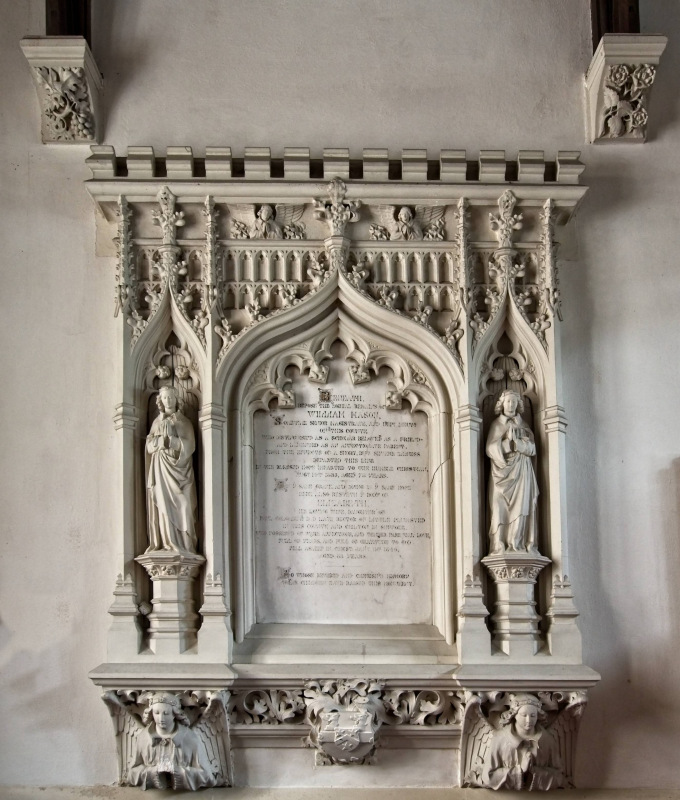